The Olympic Games are all about competition. Russia vs. USA during the height of the Cold War;  Harding vs. Kerrigan in the ’90s; and during these 2016 Olympics in Rio, PED athletes vs. clean athletes in the form of  King vs. Efimova and others. Just like the Games themselves, Rio de Janeiro too is a land full of many similar “vs.” – a place shaped by tensions that inform Rio’s evolving identities. And while it may not be the most popular movie to ever have come out of Brazil, the film that best illustrates these tensions is a beautiful, endearing black & white film from 1965 called My Home is Copacabana.

Perhaps the most iconic image of Rio (aside from Christ the Redeemer) is the image below: Beautiful people on beautiful beaches with rolling hills as a backdrop. It’s when I visited Rio in 2013 that I realized there’s much more of a story to what these mountains and beaches represent – a tension between the rich and poor.

Up to the left of those hills are the favelas, or slums. In the States, the rich live up in the hills. They build their lavish homes on the sides of mountains, tucked up where they’re less accessible, overlooking the area below. Not in Rio. In Rio, the poor are tucked up away from everyone. The rich have beautiful homes on the beaches, and for the people in the favelas to make any money, many of them need to travel for hours by foot down the hills to the beaches.

This is the story of My Home is Copacabana. Hours of real interviews with kids from Brazil’s slums were collected, and Swedish filmmaker Arne Sucksdorff brought their anecdotes to life. Among many things, what My Home is Copacabana does so well is challenge our understanding of who’s rich and who’s poor.

The beaches – the place where the kids are rummaging for cruzeiros amidst some truly awful people – is the place where we feel most uncomfortable. In a definitive scene that takes place in a Copacabana beach bar, a rich man is complaining about a shoe shine he’s getting from one of the kids. A documentary crew, likely taking photos for an international magazine, comes over to take pictures of the situation. The man screams at the reporters for sensationalizing the poor in his country:

“Sending our misery abroad – taking pictures of beggars!” he stands and yells.

The kids are disgraced. This situation sheds light on recurrent questions that Copacabana seeks to answer: Where is home? Where is comfort? Where is there hope for these kids? If it’s not in Copacabana – a source for which the children envision a better life – then where?

While the characters don’t likely see it, the audience feels a sense of comfort when the kids are up in the Morro de Babilônia favelas; perhaps it’s the kids’ more carefree & playful nature or perhaps it’s because Sucksdoff’s beautiful imagery of Rio behind. While some viewers may not feel this same sense of comfort, for me, it’s a result of a release of tension. 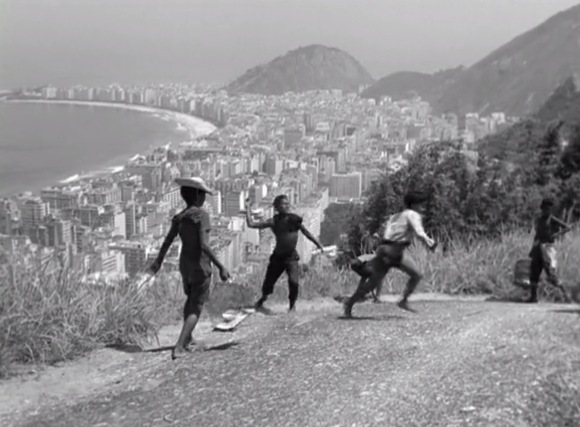 On the beach, with the sun burning a hole in the lens, there’s too much activity. The kids are scratching and clawing for any  bit of money – a battle over territory, a fight for attention. Meanwhile the rich are looking at the poor like cockroaches, and the beach has taken on a character in it of itself epitomized by all of the cruelty and insecurities having excess money can bring.

Meanwhile, the kids have found a way to cope with their harsh realities. Making fun of each other, telling stories (which we’ll dive deeper into later) – the pack has found a way to cope-a-cabana. The way? Maintaining a balance between two identities: one with a foothold in the mountains, while the other is looking for footing on the beach. And one distinct demonstration of this is through the use of samba.

No better character demonstrates the influence of samba on identity growth and development than Jorginho. Seen humming, whistling, and almost always strutting & dancing while he walks, there’s a unique bounce and rhythm to Jorginho’s movements that allows him to find success on the beach. Part confidence and part naivety (a child’s innocence), more than any of the other characters Jorginho has found a balance between a hopeful past life in the mountains with dreams for a better life on the beach.

Dancing is a motif throughout the film. The ways the kites move, the way women transport baskets atop their heads – these are all reminders of colliding worlds between the rich & poor, past & present, nature & nurture. Through this, a relief in expression: laughter, happiness, tranquility.

Samba is still an expression for Brazilians today. And while the dance has evolved – and really become popular among all classes of people – it is still a deeply-rooted expression of identity in the favelas. I witnessed this first hand while attending a party in Rio’s favelas in 2013, and I quickly realized that I needed to master this dance in order to blend in (better):

So can poor kids from Rio – full of dreams and aspirations – alter their ‘fate’? The answer perhaps lies in Rio’s ongoing battle between Jesus vs. the Anti–Christ.

“Caxambu was hell on earth,” said the narrator, introducing how far Rico has already come just to escape the Caxambu orphanage to find himself in Rio in the first place.

There are countless references to hell, the devil, and bad omens throughout Copacabana. And while we never see it in the film, Christ the Redeemer looms over their city – a symbol of hope and strength that locals strive to reach. This ongoing battle of good vs. evil shapes both the film’s characters and the story of Rio in a number of ways.

First, let’s see how it impacts Rico. After escaping Caxambu, Rico vowed never to return. Constantly referring to it as a hell, no matter how difficult things would get in Rio, life was still better. “I was crying so much I couldn’t even pray,” Rico said of his experience in Caxambu.

At the end of the film, Rico has an infected tooth. With no money for a proper procedure, a friend with a pair of pliers rips out his tooth. Scenes later, an infection has come upon Rico, who is convinced he’s going to die. While his friends try to comfort him, Rico decides to return to hell because he would rather not “die on this beach.”

This is how the film ends – with a rock bottom decision that will surely impact the future of these kids. At first I was confused by Rico’s decision: Why would Caxambu be any better? But the more I thought about it, and the more I realized that these were only kids, the more it made sense. As kids, the hope for the future is so promising. “I want to be an adult!” I would always tell my mother. “No, you really don’t,” she would respond. She was right. Mothers are always right. Except, Rico didn’t have parents to teach him that. He relied only on his sense of right vs. wrong in the upside-down world in which he grew up in. This sense of right vs. wrong is guided by nothing more substantive than a sort of religion of hope that has been played out through a mere belief that things will improve. So when thing don’t improve, and the tensions between good vs. evil, myth vs. reality, Jesus vs. the Anti-Christ become too great, Rico is grounded, and forced to make a sudden and very difficult decision on whether or not to return to his place of origin. The verdict on his decision is never addressed.

The narrator describes the favelas as “an upside-down world where bandits are heroes and police are villains.” Olympic swimmer Ryan Lochte knows this… Or does he? Joking aside, the narrator’s quote is one that, unfortunately, typically paints the picture that many of us know of Rio. And while true, what My Home is Copacabana does well is challenge our thinking as to why this upside-down world exists in the first place. My takeaway: It’s not a result of who  people are, but a result of the of the tensions that people exist in.

Bronze vs. Silver vs. Gold

The movie opens with the narrator saying:

“Rico was the only one who was white… Their mothers were dead and they had no father – or rather, they had too many. Hence their different colors. Lici was almost white, Jorginho black, Paulinho bronze colored…”

From the get go, the audience is introduced to the characters through skin color to highlight an environment with deep-seeded racial tensions that impact the character’s journeys in a number of ways.

In the NPR story, “In Brazil, Race is A Matter of Life and Violent Death,” there is an alarming statistic from 2012 that puts Brazil’s murder rate at more than 56,000. And among that stat, the number of deaths among the black community had risen 40% from the previous decade. NPR reports:

“Those who are white tend to be able to afford themselves and avail themselves of greater security, and we are seeing reductions in homicides,” says Robert Muggah from the IGARAPE Institute, a global security think tank based in Rio de Janeiro. “Those who are black and who are unable to — as our societies become more and more unequal — are less able to secure those public goods, and as a result are seeing homicide rates going up.”

The article cites a brutal history of slavery as being a key reason for ongoing racial tensions.

In one scene, Jorginho is confronted by a rich white man in a diner. Jorginho is sneaking up to try and get some food, and the white man see him. The exchange is as follows:

They live in a society where the kids’ truths aren’t ‘impactful’ enough. So the kids try another way – they start making up extravagant stories. For Jorginho, a black kid, a story of how the cops locked up his father. For Rico, a white kid, a violent story about his father’s PTSD after returning from war. Of course, their stories are fiction, but they worked. The kids got people to give them money, successfully tapping into their emotions because these are seemingly realer, more plausible situations.

I believe that the narrator opens with an introduction to the characters’ races because this is the predominant underlier for which all other tensions spawn. Like America, Brazilian society has been heavily shaped by a brutal history of slavery, and the racial tensions that exist are a major fuel in many of the country’s fires. Gang violence, drugs, crime, corruption, etc. are only enhanced through rich vs. poor, white vs. black, fate vs. choice, dreams vs. reality, fact vs. fiction. There are many, many other films from Brazil that illustrate these very conflicts, and My Home is Copacabana is the one that introduced us to them all…